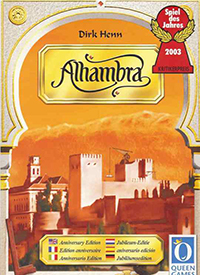 ALHAMBRA is a quest to build the greatest and most impressive constructions projects in Granada: Alhambra.  Alhambra is a palace, fortress, and a small city all in one.  It includes pavilions, beautiful gardens, towers and chambers.  Alhambra is a competitive board game where players race to employ builders in all of Europe with special talents and skills all while trying to pay fair wages in their native currency.  It was the board game of the year in 2003.

In Alhambra, players are acquiring buildings to be placed within their Alhambra complex.  The money in Alhambra comes in four different currencies and is available in the open money market. The 54 buildings of six types become available for purchase in the building market four at a time; one building is available in each of the four different currencies. On a player’s turn, a player may 1) take money from the open money market, 2) purchase a building from the building market and either place it in his Alhambra or reserve, or 3) engage in construction and re-construction projects with buildings that have been placed in the player’s Alhambra or reserve. The game rewards efficiency, as when a player purchases a building from the market for the exact amount of money, the player may take another turn.

Players with the most buildings in each of the six building types in his Alhambra score in each of the scoring phases, and points are awarded for players’ longest external “wall” section within their complex. The game ends when the building market can no longer be replenished from the building tile supply, and there is a final scoring, whereupon the player with the highest score wins.

The game takes about 15 minutes to learn but isn’t too complex.  It is categorized as an entry-level strategy game for anyone starting the hobby.  We always take time to teach you the game before you get to play at our sessions.  Watch the videos below for more details on how to play the game.