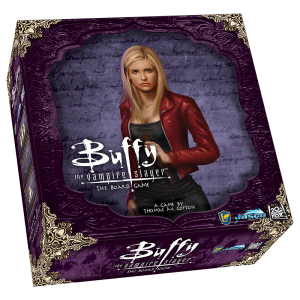 BUFFY THE VAMPIRE SLAYER:
THE BOARD GAME

Buffy the Vampire Slayer: The Board Game is a cooperative hand-management style board game.  In this game, you help Buffy and her friends defend the town of Sunnydale from an onslaught of vampires and demons, while ultimately attempting to foil the big bad’s plot and prevent the Hellmouth from opening. You have to work together, using all of your resources — including special abilities for the character that you play, whether Willow, Spike, or Buffy herself — to defend the helpless townies.

To bring down the big bad, you have to go through 3 monsters-of-the-week as well as any vampires/demons that spawn after every round. After taking down each monster-of-the-week, a clue is left behind that adds an additional plot to figuring out how to defeat the Big Bad. However, you have to avoid running up the apocalypse counter or else you lose the game. Wounds and killed townies (people who need saving) run up the counter.

There are different types of cards that help with taking down the bad guys. Items such as stakes (for dusting vampires), holy water (for stunning enemies), and weapons (for slaying demons) help take out enemies. Artifacts may either help (slayer scythe) or hurt you (Box of Gavrok) during play. To take down the monsters-of-the-week and the Big Bad, you have to collect various items as specified on their card and have a certain amount of ‘luck’ to take them down.

The game is dripping with theme and you truly feel like you are living and fighting in the Whedonverse.  But, even if you have never seen an episode of the cult TV show, you can still enjoy the mechanics of the game.  Many have compared the mechanics to Pandemic.  It does share some similarities in that you are always trying to deal with evil uprisings and each person’s character has specific powers that work in combination with yours to keep evil at bay.  The game has also been called Arkham Horror Lite, though the game isn’t as complex and doesn’t take as long to play as Arkham Horror.

Players will encounter a learning curve with the game, especially if they are new to modern board game mechanics.  However, in less than 15 minutes, players can learn all they need to know to enjoy the game’s challenges.  So, don’t be intimidated – we will help you out!