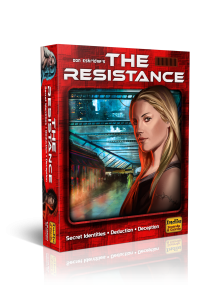 The Resistance is a game of intense bluffing and social deduction played with larger groups.  It tends to be considered the prefect party game because it can accommodate up to 10 players and takes less than 30 minutes to play.  The Resistance is inspired by Mafia/Werewolf, yet it is unique in its core mechanics, which increase the resources for informed decisions, intensify player interaction, and eliminate player elimination.

Since it is considered a “party” game, it is very easy to learn in less than 5 minutes.  The game encourages social interaction and skillful bluffing.  Though it can be intense, the game is very innocent and quite fun in larger groups.  This game is so popular that it has inspired countless spin off games, expansions and adaptations.